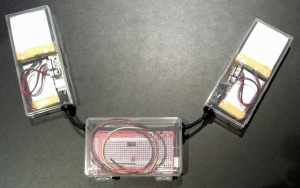 The three parts that are mounted on my belt

Today I spent a bunch of time getting the belt assembly set up. Today’s work:

I still haven’t hooked up the Arduino side of the power wiring. But I really like the way the strain reliefs turned out. They are, like nearly everything else in anthrolume, a hack. They’re each made out of two rubber faucet grommets that are held in place by heat-shrink rings.

Belt with batteries and Arduino attached

Today I built the two battery boxes for anthrolume, along with the power boards that consolidate the power within the boxes to four wires. Each box holds three batteries. Of the four outputs, two wires are ground, one wire is the positive of the two big batteries in parallel, and the last is the positive of the single smaller battery. The two boxes are mirror images of each other, to be placed on my belt one on each side of the Arduino box, providing even weight distribution. The power from these two boxes will be again consolidated inside the Arduino box to essentially stack the four big batteries into a 4V, 10800mAh power source, and putting the two smaller batteries in series for 7.6V, 1300mAh. The big stack powers the I2C buss with all the LEDs, and the other series batteries run the Arduino, display, etc. 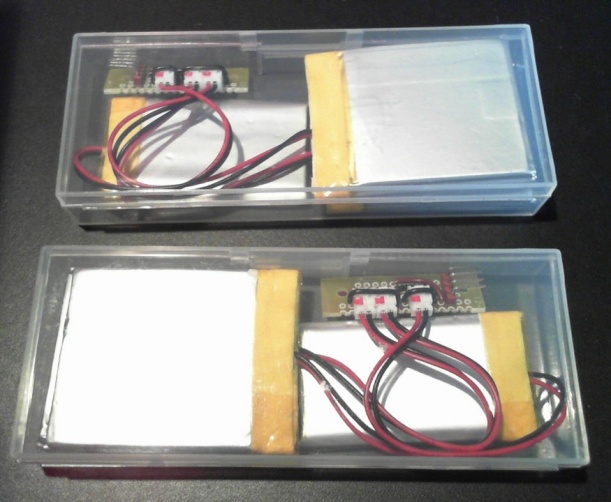 I made some changes to the harnesses today on MiniMe to prototype those changes before I make them to the full-size rig. The changes come from my attempts to create a final head+spine buss. The two big changes are that I’ve made the head detachable (that is, it’s not longer part of the spine), and that the spine is now basically just a buss – no LEDs live there. I moved four LEDs off it yesterday (the “lower spine” now its own little harness), so now the spine only serves to connect the head, arms, lower spine, chest, Arduino, and legs (in that order).

And since i made that dreadful quarter-scale copper armature for the chest buss, I figured I might as well press the thing into service. Now it backs the chest LEDs, so their spacing is a bit better.

Here it is blazing half-brightness red (much more than that will over-current my USB port).

A couple of days ago I got the spine working enough to connect all three harnesses together (arms, legs, and chest). According to plan, the spine contains the 8 LEDs that go around my head, and four that visually connect the chest to the legs. When I put it together though, I needed to create some slack in the ribbon cable, so that there’s no tension on the connectors. This was going to make it difficult to get those last four LEDs to be spaced right, and to face forward. So I decided to tap off a fourth mini-harness to hold just those four LEDs. As usual, I prototyped it on MiniMe so I could know exactly how the connectors would be arranged. Here’s the MiniMe proto.

I’ve caught some bug that’s going around the office. I feel worse today than yesterday. And I’m not much in the mood to work on the suit. But I snapped this pic last night with 46 out of 50 LEDs mounted on my body. The only missing LEDs are the four spine LEDs that visually connect the chest section to the legs.

This deliberately underexposed picture has all the LEDs showing white at the lowest possible brightness (i.e. RGB 0x010101).

The head portion of the head+spine harness

Here’s the head part of the head and spine harness. This is in many ways the most important harness in anthrolume because it acts as the electrical backbone for the other three harnesses (arms, legs, and chest). It has eight LEDs around my face, as shown, and another four down below. The lower part of the harness isn’t done yet. I have to be extra thoughtful about exactly where the other harnesses attach, and where the spine attaches to the Arduino, which will be belt-mounted.

I’m using some new material in this harness as well. I’m using this crazy-strong double-sided foam tape to hold the right-angle ribbon folds together, and I’m using little wedges of cosmetics foam to push out the two LEDs on my hat. The harness attaches up there with velcro in three places.

I had a really good experience using polyethylene (PE) for the chest frame. I’ve really warmed up to that stuff. I went to a plastics shop today and they had a bunch of PE boxes. None was the perfect size for the Arduino Mega + protoshield, but there was a box that had dividers molded into it that was pretty damn close. So I bought one (PE is cheap!) and cut the dividers out with a flush-cutter. It closes, but it’s a little too snug with this particular protoshield on it. I’m going to build a new one that doesn’t use the pass-through headers, and will use lower-profile LEDs. Then it will fit with plenty of room. Getting power into there will still be a challenge, but I like the form factor. Smaller is better, since this has to mount on my belt. 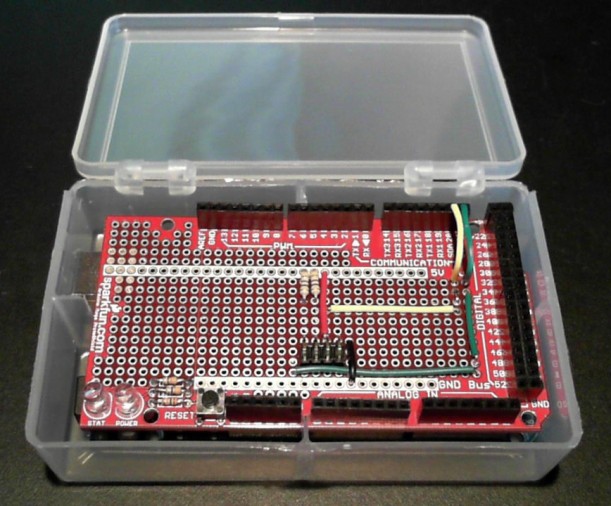 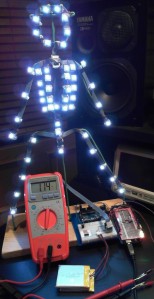 Hooray! I did the third test I mentioned in the last post – I hooked up two batteries in parallel, instead of in series, and with no regulator. The two fully-charged batteries were delivering 4.18V. It turns out that’s enough to drive all 50 MinMs to full brightness. And (apparently) due to the slightly lower voltage, the current draw is lower too, ranging from 0.28A to 1.14A over the full brightness range.

This is really great news. For one thing, I don’t need an energy-wasting, heat-generating voltage regulator at all. And for another, I can stack all four batteries in parallel. This has the advantage that if I have a battery failure in the field, I just have less juice – I don’t have to take two batteries offline because of a single failure (as I would in a series-parallel setup).

I have one 1300mAh LiPoly battery, and I just ordered another one. I will put those two in series and run the Arduino Mega off that, and use the four big 2700mAh batteries in parallel to run the LED buss. This weekend I’ll do a test to see how long those four batteries can run the LEDs at full brightness before the voltage drops below 3.8V — that’s where the LEDs will start acting wonky.

Here’s the current-versus-brightness-value graph for the parallel setup.

All LEDs at max brightness

Glorious success. Using an NTE931 3A, 5V voltage regulator, I’ve managed to get all 50 MinM LEDs up to full brightness. They’re pulling 1.68A through their tiny four-wire buss. Here’s a picture of the setup, running at full brightness (that is each LED set to RGB 0xffffff).

Interestingly, this max current draw (1680mA) means that my batteries could theoretically power the suit, at full brightness like this, for 3.2 hours solid. I’d be a walking flashlight. Naturally this is worst-case current draw, so I think my real-world battery life will be much longer.

You can see the big voltage regulator, upside down, with three alligator clips on it. At full current, that guy is almost hot to the touch. I hate to be wasting energy as heat, but I can’t run the MinMs at any voltage over 5V. For kicks. I’m going to try to run the buss unregulated off a single battery, which when fully charged delivers over 4V. If I can still get the LEDs to full brightness that way, I might just connect all four batteries in parallel instead, and avoid wasting energy on the regulator.

Here’s the graph of LED brightness value versus current draw in amps.

Current draw (A) versus brightness 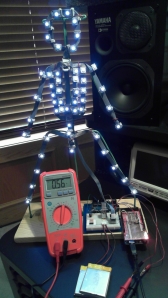 My plan, power wise, was to get four of these LiPoly batteries in series-parallel and feed 7.2 (or more) volts into the VIN pin of the Arduino, then pull I2C buss power off the Arduino’s 5V regulated rail. I needed to do this because the MinM LEDs run at 3.8V to 5V max.

However, in my experiments, these beefy batteries can’t make up for the fact that the little voltage regulator on the Arduino really doesn’t want to deliver more than about 500mA. So I’m investigating alternative ways to get enough juice to the I2C buss.

One good possibility is to set up a completely independent power supply for the hungry I2C buss, then run the Arduino off something more modest, since its power requirements are much lower. So I tried creating a little voltage-regulated power supply for the I2C buss using the batteries and a 7805 regulator. The Arduino Mega, in this setup, just runs off USB power. I bridged the I2C buss SDA/SCL lines over from the Mega. Here’s the setup: 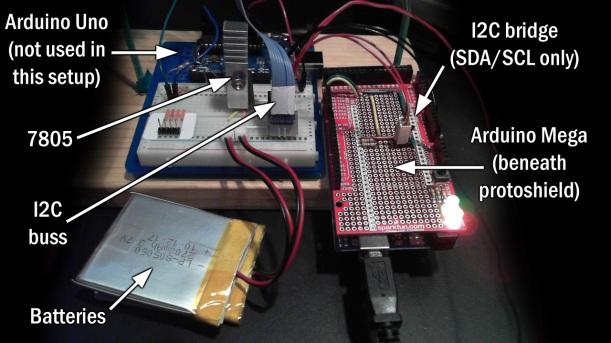 Results? Sigh. The 7805 doesn’t really want to deliver much over half an amp either. So my next attempt will be to create a much beefier power supply, using an LM323 5V/3A regulator.

Before I thought these LEDs drew less current than expected. But now I’m revising that. With the LEDs off, the I2C buss still draws 350mA. That shouldn’t really surprise me – there are 50 little computers out on that buss, spinning in tight loops. So it’s no wonder that turning on the LEDs makes the current go up a lot. I tried filling out a spreadsheet of white-level (1-255) vs current, and with this setup I couldn’t get over white-level 32, at 0.57A.