I’ve started creating the “final” electronics that I’m going to package into some kind of belt-mount enclosure. To start with, I wired up a permanent I2C buss connector (with pullup resistors) to the Arduino Mega’s protoshield, which is shown here. 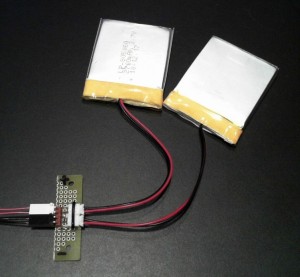 One of two power assemblies

I also constructed one of two power boards. These boards will flank the Arduino inside the case, and will be where the four 3.6V, 2700mAh lithium polymer batteries will attach. They’re series-parallel – two batteries on each side in series, with the sides in parallel. That is, about 7.2V, 5400mAh total.