My anthrolume light suit makes its debut at Burning Man 2011.

I’ve just returned from Burning Man 2011. I’m pleased to say that Anthrolume was a dramatic success at the Burn, garnering an truly gratifying, continuous outpouring of support from Burners. I cannot count the number of people who yelled “great lights!” or “great suit!”, or high-fived me, or stopped to ask me about the outfit while I was out at night. Art cars stopped, wanting me to come on board. People yelled down from moving vehicles to me. And countless people stopped to give me the stock Burner hug. The response was far better than I had hoped for, and it really makes the whole project feel worthwhile.

I have a few low-res videos of the suit that I’ll upload soon. There are a couple stills from those videos interspersed through this post. In a week YouTube will be littered with videos of Burning Man, and I’ll look for myself in those too.

Monday
We arrived at sundown on Monday and found ourselves in what would become a four-hour line waiting to get into the event. After a few hours, I ventured forward to count the cars in front of us: 125 (in our lane – there were 10 lanes). On the walk back I saw a CoolNeon color display in the window of a huge RV and stopped to compliment the driver. I told her about my suit, and she told me that given we were all going to be in line for the foreseeable future, why not just put it on for the entertainment of the people in line? So i decided what the hell, why not debut the suit before I even got through the gate.

I put the suit on over my clothes (which is rather difficult) and walked back between the entry lanes to find the RV. The response was immediately positive. And it worked well given that the event had basically already started for the people in line – people were dancing on top of busses to the usual high-powered mobile playa sound systems that were waiting in line with every one else. The number of compliments I got just on a couple trips through the line was enough to predict success for the rest of the week.

Once through the gate and at our site, we unloaded and immediately crashed for the night, leaving camp-building for morning.

Tuesday
Even by Tuesday there was an impressive array of artwork installed on the playa and large camps in place. We built camp and I took some big panoramic pictures.

During the day I set up MiniMe to test and debug all the color table code I wrote during the previous week. Naturally it was buggy – I wrote it all blind, without the rig available on which to test it. But I got it all working and loaded up into the suit’s computer.

Tuesday night was warm, and the first night out on the playa for Anthrolume. I donned my bike shorts and underamour, then the rest of the suit itself. The first challenge was to see if I could ride a bike with the suit on. I turns out that by giving myself lots of wire slack at the knees I could ride quite easily. 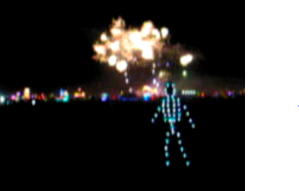 If I thought the response was positive in the entry line, it was just plain over the top the first night out. So many people came over to ask about the suit or give their compliments. At about 1am we headed over to the 2-o’clock Rave were my camp-mates encouraged me to ascend one of the dancing platforms at the Rave. I was pretty intimidated about this – I’m a standard white guy which is to say I can’t dance particularly well. But the fact is, the lights do the dancing. I finally garnered the courage to get up there and…wow. I was lighting up the whole crowd (running at full brightness), and the response was really amazing – everyone was pointing up to me and waving, coming over to touch my ankles and yell up “great lights!” The beat syncing facility of the suit worked remarkably well. The suit was just pumping light out in big waves to the beat. I was constantly tapping in the beats of the excellent 4-down music they were spinning, and manually advancing to the next animation at the end of each break so that the suit would change just at the right times. It worked like a charm.

The suit was also quite comfortable. I wore it for probably five hours Tuesday night and it never bothered me a bit.

Wednesday
On of my camp mates took a picture of me in the suit and when I saw it I could tell that one of the LED’s red channel had failed. So I did my first field repair – re-addressing a replacement LED and installing the spare. Easy fix.

A camp mate hooked us up for dinner at the Contra Dance camp…halibut, prepared five ways! Wow was it great. I was living on cheese sticks and peanut butter before that dinner.

Then another fun night on the playa. We did a lot of playa-walking, visiting art installations, and rode on various art cars. Found lots of great music, and again an ultra-warm reception for Anthrolume. But by the end…I was freezing.

The warm version of the suit

I last attended Burning Man in 2004. Somehow between then and now, I had forgotten just how cold it gets in the high desert at night. Perhaps I was rationalizing that my bit of extra muscle mass was going to allow me to withstand whatever cold I encountered. Well Tuesday’s experience forced me to rethink what I was going to wear under the suit. I opted for unexciting but warm sweatpants and a long sleeve shirt. I had already determined empirically that no one can even see my body at all anyway when the lights are on. This night the suit was much more livable. More raving, more playa exploration, more kudos from the collective Burners.

I wore the suit for 7 hours straight until (apparently) I finally ran out of power.

Friday
Friday night there was a big event to burn a 40-foot-tall Trojan horse that had earlier been dragged out onto the playa by volunteer “slaves”. They fired flaming arrows at it to ignite it, and it went up fast. But it stayed burning a long time before it finally fell. A great burn, and a fantastic art piece. 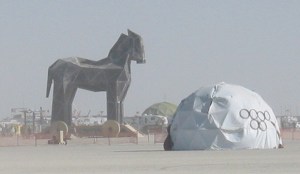 After the Trojan burn, I went out on the playa and immediately started encountering a weird failure mode. The computer was appearing to hang after a short amount of time. This was evidenced by the beat light in my hand controller – it would just stop beating, which should never happen in Auto mode. After a handful of restarts, I decided to just leave the suit off until I could try to diagnose the problem. It was nagging at me all night. Plus, it was just butt cold.

Saturday
Saturday morning I got up at 9am, which is early by playa time, to try to diagnose the fault in my suit. After a bunch of screwing around, including disabling all the color table code I wrote earlier, I determined that if I moved around the harness at the place where its IDC connector plugs into the belt computer I could reproduce the failure. I decided to go ahead and re-build the spine buss. It’s a relatively simple harness – a feeder for the other five sub harnesses. Using the original as a measure, and a pile of parts I’d brought along, I had a new spine harness in about an hour. I installed it into the chest frame and it worked the first try. Afterwards I couldn’t reproduce the problem, but I couldn’t be sure that the work I’d done would really fix the suit. It was a best effort, and I was as ready as I could be for the Burn that night.

At about 8:30pm we all headed out for the Burn. Pretty much all of the estimated 55,000 Burners were out there, and they all had their A-game on. Everyone was either blinking, flashing, or glowing with EL wire or chemiluminescent sticks. Every art car and mutant vehicle was arrayed around the Man, outside the fire perimeter. Even with all the top notch costumes out there, there weren’t many reaching the complexity of Anthrolume. It was fun to just be part of it, another blinking, flashing dude. And as far as I could tell, the suit was working great. My best guess, in retrospect, is that the I2C clock line was severed on the IDC connector to the belt computer, and replacing the spine harness fixed that.

The Burn started with a truly spectacular fireworks show. It’s pretty much like the grand finale of every fireworks show you’ve ever seen, back to back, continuously for 15 minutes. Finally they sparked him, and he looked like he was burning pretty well. Then the fire got down to a big cross member in the base. It must have contained a tank full of gasoline or something, because it exploded in a gigantic fireball, nearly scorching the eyebrows off all of us. And that really got the man going. At that point the Man wasn’t long for this world.

After that we walked out onto the deep playa and looked at more amazing artwork out there, then headed to the 10-o’clock Rave for some dancing, and finally at about 1:30am we had to call it a night to get enough sleep for our early departure on Sunday.

There’s probably no place out side of Burning Man where people would so much appreciate something like Anthrolume. It really was a hit, and I’m super gratified by the response and glad to have been a contributor to the overall vibe of this year’s Burn.