Holes in the trench back

A lot of alliteration. But lots of good news to offset it. Tonight I finished the last of the 1,000 holes in the trench that will accommodate the LEDs. There’s no question that burning a thousand holes in a trenchcoat reduces its strength, but I’ve got some faith that this Thailand-made coat is a little overengineered and will be able to bear the 19 lbs of LEDs I’m going to put into it with poise.

Today two battery packs showed up, so I’ll be able to test those this weekend. One was falsely claimed to be 20 Ah, but has printed right on it that it is 8 Ah, so I probably won’t be using that one. Still, it claims to be able to deliver 3.1A, so I’ll see what it can really do. The other is a second Tekkeon MP3450I, which is a really burly battery that I’m hoping I’ll be able to use. I’m going to parallel up the two I have and see if I can really get 8A @ 5V out of them.

I’m also excited to have received 1,600 nylon washers, which were quite pricey, but fit my LEDs perfectly (thanks Amber!). These washers are incredibly light – approximately 1/200th the weight zinc-plated steel cut washers I used in Anthrolume 2.0/3.0. When I’m carrying around 1,000 of anything, I’ve gotta be thinking of weight, and these will definitely help.

Finally, I took a second look at the trench’s physical features and came up with a revised serpentine path through the suit that takes into account the pockets and front flap of the trench better than the original path. This is the final path, and now I have everything here to actually put the LEDs into the suit. It’s an exciting time!

521 holes burned into the front of the trench

I now have a well-ventilated trenchcoat. Over the course of the Memorial Day weekend I have burned the holes for the entire front of the suit – 521 holes. It is mostly an easy (if monotonous) process, with a few exceptions near the edges, or where there are features of the coat that I need to preserve like the front pockets. In cases like that sometimes I have to push a jig into the coat to hold open a space below the hole I’m burning. Those ones take longer, but they’re relatively rare. For what it’s worth, the back of the trench should be considerably easier than what I’ve already done. I’m gonna say another three hours of hole burning and I’ll be done, which probably means I’ll be done by the end of Wednesday night.

A little polyester, and some brain cells, were sacrificed

Now that I’ve sorta figured out how I want to handle the pockets and other semi-complicated parts of the trench, I’m thinking of making some changes to my serpentine path, for instance to try to do all the LEDs on the outsides of the pockets in a single path, rather than having the strand entering and exiting the pockets in more than one place. I will likely make those decisions when I am actually installing the LEDs in the trench, maybe over next weekend.

I’m definitely bored (all possible puns intended) of burning these holes, but I’ve gotta power through to get to the fun parts.

First batch of holes in the trench

Or, perhaps I should say, hole-y trench.

I started burning the holes into the trench today. I did a little over a hundred of them, in the most complicated part of the trench. The left and right front of the trench has the front pockets (which I’m trying to preserve) and an inner zipper flap. So some of the holes have to burn, say, through the front of the pocket, but not all the way through. It’s a little tedious and provides plenty of opportunity for error.

After a while as you’d expect I got a good rhythm and technique going. I poke a hole straight through, then bore a little “+” out from the center to the boundaries of the circles I drew yesterday, then around in a circle to finish it out. It takes about 20 seconds for each of them. At that rate it’ll take around six hours to bore all the holes.

Tuesday I’m ordering 1,500 nylon washers, and after they arrive I’ll be able to mount all the LEDs. I’m pretty excited to get into that part of the fabrication. 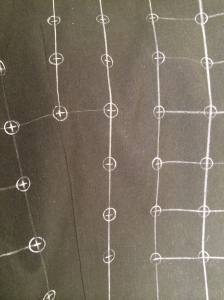 I’m getting ready to burn the holes into the trench for the LEDs. When I burned my test hole in the hood I learned that once I burned out the center “+” mark, it was hard to keep track of the center while widening the hole. Also it was easy to make the holes too big. As a result I decided, somewhat casually, to draw 7/16″ guide circles, using a metal washer as a template, around all the LED locations on the trench.

It wasn’t long before I realized that I was about to make a two-hour commitment, because I was going to have to draw 1,000 circles. In a sense, the trench project is a commitment amplifier. All decisions get multiplied by 1,000. And that means no decision is really trivial.

When I finished drawing all those circles (and using up 2/3 of a white Nonce fabric marking pencil in the process), I realized how much commitment and dedication this project, and all my art projects, require. It is part of the sacrifice that the artist makes in the creation of art. Moreover, the commitment put into all works of art is so easy to overlook. When you look at a piece of art – even one you don’t like – remember how much sacrifice the artist needed to put into that piece. It will help you appreciate art, and your own work, even more.

The care tag on the trench

I ended up doing a bunch of important IT administrative stuff tonight instead of working on the trench, but I did do one important thing – an LED attachment test.

The trenchcoat I have is an “all-weather” trench. I knew it was at least partially synthetic, but it turns out that both the shell and liner of the trench are entirely polyester. That’s great news, because it means that I can burn the holes into the trench for the LEDs. It is not only convenient, but burning the holes also melts the edges, cauterizing the holes so the fabric won’t fray. It’s really perfect.

Process of mounting an LED in the trench

Tonight I cut a bit of the liner out of the hood (which I’m not planning on using in the final piece) and used it as the subject for an LED mount test. I burned the hole with a large-scale soldering iron, and that was super fast and easy. The actual mounting is nearly the same as with my previous Anthrolume suit – push the LED barrel through the hole from the back, then affix a washer onto the front.

To save weight this year I’m using nylon washers. I’m still trying to find exactly the right size, but in a pinch 0.443" inside-diameter washers work. (I have to actually stretch them slightly before putting them on, but then they stay very well.) These particular washers are tight enough that I would probably destroy the LED trying to remove the washer – so instead I do what you do with nylon wire ties – just cut it off with a pair of flush cutters.

Now that I’ve done this test I’m more jacked than ever to actually mount all these LEDs. I don’t have the washers yet, but you can bet I’ll be burning holes like a madman over the weekend.

Last night I finished converting the code that runs on the trench’s microcontroller to understand the new Anthrolume 4.0 file format. As it turns out, the new file format actually simplified the code considerably. I haven’t tested it yet, but I will do that tomorrow night. Once I’ve got it debugged, the acid test will be to see how fast I can switch animations. I predict I’ll be able to switch animations at any frame boundary, within 1/40th of a second.

There are further ramifications of the file format change. I also changed the Bluetooth protocol for sending animation information to AnthrolumeControl, my Android suit-control app. So I will need to update that too, but it is straightforward compared to what I had to do to Animaker and the Maple code.

The last big software thing I have hanging over my head is re-doing text display. For the most part, the Anthrolume software is agnostic to what kind of suit it is operating in. The LED count is a compile-time constant, but mostly it just clocks out animations. There is however one particular big piece that is very suit-specific, and that is the text display and scrolling code. That very much depends on the shape and density of the suit, and my chosen text display area.

On Anthrolume 2.0/3.0, I had a 7×7 area on my chest and back for scrolling text display – barely big enough. This time I will have at least an 11×12 area. That means crafting a new font, and rewriting the incredibly tedious memory-moving code that scrolls the message sideways. I will at least experiment with another approach, which is to render the text on the phone, and send down a small bitmap. That would also allow me to do sub-pixel (smooth) scrolling which could make the text easier to read.

The LEDs in the trench are one single strand that snakes through the entire suit. That presents some challenges, given that the trench has to open in the front, and has LEDs inside the sleeves. I have come up with a path that satisfies those constraints and won’t require many splices (perhaps six or eight maximum). There’s gonna be a lot of wire in there. 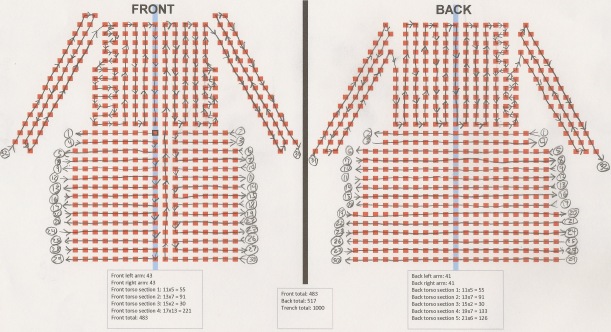 The serpentine path of the LED strand through the trench

I just made this layout schematic to help me plan my serpentine path on the suit. The LEDs are all one long strand that will wind up and down the suit. This schematic will help me plan that exact route, and also served to double-check my LED count of 1,000.

Over the weekend I added the locations for the last 20 LEDs, bringing the total to exactly 1,000. You can see the locations on these (admittedly poor) photographs of the front and back. I’m going to reshoot these soon, but I cranked up the curve so you can see the white marks on the trench. There will be an LED at all the intersections of the white lines.

Also I modified my Animaker software to emit a single file that contains all the animation sets, animations, metadata, and actual frame data into a single big file. Re-exporting the 150 250-LED animations I had previously created for the Anthrolume 3.0 suit, the output file is 28.7MB. Since the trench has 1,000 LEDs instead of 250, I expect the trench’s file to be about 114MB.

I just finished mapping out the LED positions on the sleeves. The shape of the sleeves was hard to model when I was trying to budget out the LED counts because they have varying circumference. I had originally estimated < 210 LEDs for the sleeves, and when I mapped it out I ended up at 168. Here is the breakdown of LEDs right now:

There are two spaces on the sides of the trench that are going to each get six LEDs, and there are four places on the front and back that will get two LEDs each. That will put me at exactly 1,000. Too late for that tonight, but by tomorrow the entire trench will be completely mapped.