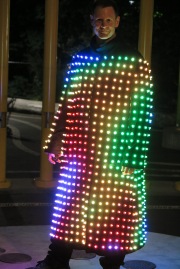 On Saturday August 12, 2017, from 8:30pm to 11pm is the wonderful Lusio show in Volunteer Park, Seattle, WA. The free, family-friendly show features an exciting array of light art and performances placed throughout the park.

This year I am honored to present the piece Ripples, which was conceived by my friend Briar Bates only months before her passing. I and collaborator Dan Walker will be showing this piece in its full form for the first time publicly.

In addition, I will be stalking the park in my Anthrolume trenchcoat, sporting nearly 100 new animations this year.

This is a show you won’t want to miss. Take public transportation if you can – last year thousands of people attended! See you there! 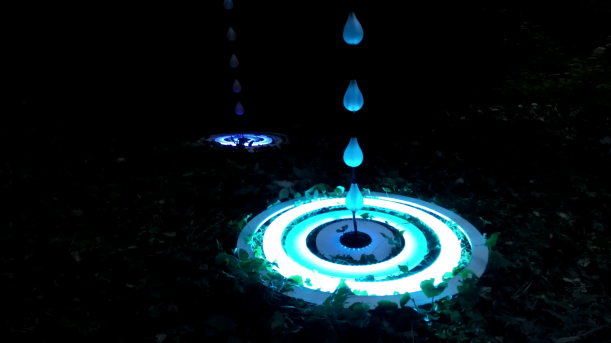 There’s a one-night curated art show called Lusio Light in Seattle’s Volunteer Park on Saturday July 30, from dusk until 10pm. I will have a new, small sculptural piece in that show called the Sunflower of Symmetry, and I will be wearing the trenchcoat as well.

The show’s free and kid- (and dog-) friendly so come on out and see some great light-oriented art. See you there!

I’d like to introduce you to someone who has been part of my artistic journey for a few years now. His name is Bob. Bob is my mannequin. He’s a handsome one, and he knows it. He lives in my studio, where he often holds up the wearable art pieces I create while I’m working on them, and sometimes does long gallery stints, tirelessly modeling my creations.

Never anything to wear!

But I have to admit…Bob spends a good bit of the time naked. And I think it was getting to him. Here’s Bob, before. Bob is of course a model, and models are rarely shy with their bodies. But Bob…he’s a little self conscious. With reason, if I may say so.

In two weeks I’ll be at Electric Sky in Skykomish, and Bob’s coming with me. I’ll be creating animations for this year’s presentation of the trenchcoat. So during the day, Bob will be busy holding up the trench. But at night, I’ll be leaving his naked ass in the common area. He’s been fretting about that a bit.

So I decided to reach into the past for a, um, solution to Bob’s issue. Starting around the 1530s, depictions of male nudity in sculpture and statuary were deemed unchaste, and castings of fig leaves were often affixed to such artworks. While no artist would condone such an act, you have to admit that such a treatment on Michelangelo’s David could have saved the poor guy from centuries of tittering mockery by every visiting schoolchild.

Enter my modern satirical iteration on the mid-1500s censorship device. It’s a felt fig leaf with adhesive felt details. Behind it is a modified LeafLabs Maple microcontroller (yes, really) and 11 green LEDs run off PWM channels so that the Maple can control their brightness individually. All is powered by a 1600 mAh LiPo battery for 12+ hours of continuous chastity. And it’s finished with a leafy ribbon girding that Bob tells me is, indeed, fabulous.

Given its origins in history, my modern Fig Leaf does, I suppose, deserve a proper artist placard:

Fig Leaf explores the irony of modern attitudes towards nudity and sexuality. In the early 1500s, conservative churches and governments began censoring public sculptures with castings of fig leaves. Fig Leaf turns this idea around, drawing attention to the leaf itself and thereby the mysteries that lie beneath it. 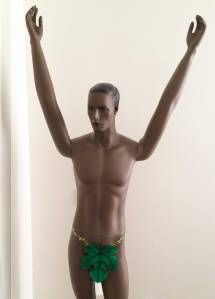 Now that I’ve finished the programming for Fig Leaf’s 15 simple animations, I will return to my preparations on the trench for Electric Sky. Bob, for his part, seems excited. He seems comfortable now to spend his Skykomish nights slightly less naked.

There are a few construction images in the video below.

P.S. Don’t tell him about this little NSFW detail. I still want schoolchildren to titter at him.