I’d like to introduce you to someone who has been part of my artistic journey for a few years now. His name is Bob. Bob is my mannequin. He’s a handsome one, and he knows it. He lives in my studio, where he often holds up the wearable art pieces I create while I’m working on them, and sometimes does long gallery stints, tirelessly modeling my creations. 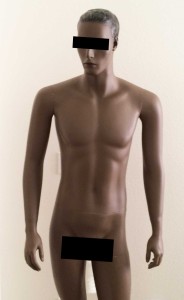 Never anything to wear!

But I have to admit…Bob spends a good bit of the time naked. And I think it was getting to him. Here’s Bob, before. Bob is of course a model, and models are rarely shy with their bodies. But Bob…he’s a little self conscious. With reason, if I may say so.

In two weeks I’ll be at Electric Sky in Skykomish, and Bob’s coming with me. I’ll be creating animations for this year’s presentation of the trenchcoat. So during the day, Bob will be busy holding up the trench. But at night, I’ll be leaving his naked ass in the common area. He’s been fretting about that a bit.

So I decided to reach into the past for a, um, solution to Bob’s issue. Starting around the 1530s, depictions of male nudity in sculpture and statuary were deemed unchaste, and castings of fig leaves were often affixed to such artworks. While no artist would condone such an act, you have to admit that such a treatment on Michelangelo’s David could have saved the poor guy from centuries of tittering mockery by every visiting schoolchild.

Enter my modern satirical iteration on the mid-1500s censorship device. It’s a felt fig leaf with adhesive felt details. Behind it is a modified LeafLabs Maple microcontroller (yes, really) and 11 green LEDs run off PWM channels so that the Maple can control their brightness individually. All is powered by a 1600 mAh LiPo battery for 12+ hours of continuous chastity. And it’s finished with a leafy ribbon girding that Bob tells me is, indeed, fabulous.

Given its origins in history, my modern Fig Leaf does, I suppose, deserve a proper artist placard:

Fig Leaf explores the irony of modern attitudes towards nudity and sexuality. In the early 1500s, conservative churches and governments began censoring public sculptures with castings of fig leaves. Fig Leaf turns this idea around, drawing attention to the leaf itself and thereby the mysteries that lie beneath it.

Now that I’ve finished the programming for Fig Leaf’s 15 simple animations, I will return to my preparations on the trench for Electric Sky. Bob, for his part, seems excited. He seems comfortable now to spend his Skykomish nights slightly less naked.

There are a few construction images in the video below.

P.S. Don’t tell him about this little NSFW detail. I still want schoolchildren to titter at him.

Here’s a little video I threw together with some nighttime sights at Burning Man 2014 and lots of my Prismaticamp campmates.

Here’s a quick glimpse of the trench coat at Burning Man 2014.

In celebration of the Anthrolume 4.0 trench coat’s Burning Man debut, here is a sampling of new animations.

The time has come for Anthrolume 4.0 to make its way to Nevada for Burning Man. Before sending it out I did a bunch of last-minute work.

Over the last couple months I prepared 329 animations. The process of creating the animations happens in a Flash animation program and in my Animaker software, where I can see a sort of schematic preview of what the sampled animation will look like. Reality, however, can be pretty different. I run the trench at 6-bits/channel color resolution. That means that each of the red, green, and blue LEDs that are inside the 1,000 points on the trench have 64 levels of brightness for a total of 262,144 possible colors. 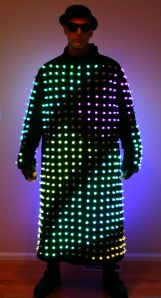 Gussied up for the burn

This bit-reduction is primarily done to dim the trench so it doesn’t use so much power. Theoretically it is 1/4 as much power as I’d use with full 8-bit resolution. On top of that, the LEDs in the trench have very non-linear brightness over that 0-63 range. I correct for that using a gamma table that I apply at playback time in the trench. Between those two factors, sometimes it can be difficult to know what an animation will look like on the actual trenchcoat. As a final quality-control step, I reviewed all 329 animations from a distance, positioning the trench by a window so that I could see both the front and back of the coat.

Off to the races

I rated every animation on a scale of 1 to 5 (with resolution 0.5), and decided to cut any animation rated 2.0 or less. That resulted in the removal of 79 animations. But, I’m left with ones that I genuinely like. I will probably make more between now and Saturday too.

After I finished my audit, I boxed up the trench and the rest of the costume, the batteries, computer belt, and charge tree into one big 40lb box, and a bunch of tools and parts into another smaller 12lb box. I took them down to Tacoma today, where they’ll be driven to Burning Man by one of my intrepid campmates.

If you’re going to Burning Man, look for me. I won’t be hard to find.

The trench and belt on the scale

The final weight of the trenchcoat and battery belt

The trench itself weights 21lbs 7oz. The belt, computer, cbox, pouches, wires and batteries make up the rest of the weight. That’s some cargo. It’ll be interesting to see how long I can actually carry that much weight around. I’m up for finding out!

The Anthrolume 4.0 trenchcoat fabrication is very close to complete. Here I detail the new power belt I’ll be wearing under the trench.

So as you can see, I can’t run the suit at full brightness, but even at quarter brightness it is plenty bright. I should be visible from at least a mile away.

I’ve got a pile of things to do still before Burning Man, including both hardware and software. Tonight I wanted to get three things done:

PointCollector’s job is to create a file that describes the (X, Y) locations of all the LEDs in their own coordinate space. This lets me use them like pixels in a big video display. Also it describes the order of the LEDs which is just as important as their locations.

As a reminder, here’s the final layout schematic of the LEDs in the trench. This updated image shows all the through-holes I had to cut in the suit, as well as the locations of all the places where strands of 50 LEDs hook together. Half those spots are marked with a ■ yellow square, which means there’s no power there, and the other half marked with a ■ purple square, which means I have to feed extra power into the strand at that point.

For my sanity, I’ve sort of spread out the arms so I can see the serpentine path easier. But when you look at the actual photographs of the suit (such as those in my last post), you’ll see that really, the arms are a sort of visual continuation of the torso. As a projection surface, I want the suit to act more like a huge cylinder of LEDs, with the arms as integral parts of that. To create that effect, I made a synthetic rendering of the LEDs that tries to smash them together so the front and back of the suit become more or less one big rectangle, an unrolled cylinder. 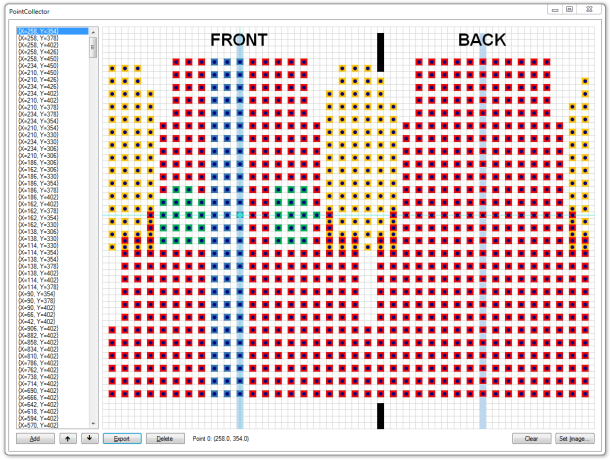 PointCollector 2.0 with the trench’s point map

In this mage, the yellow squares represent LEDs that art part of the arms. You can see the (X, Y) coordinates of every LED in the list to the left. That list also indicates the order of the LEDs. Now I can use my Animaker program to re-render all the Anthrolume 3.0 animations for the trenchcoat, and see how they look. That’s a task for later in the week.

Next up is wiring those power taps that I identified in the first image. Wiring those to a central power source will allow me to run the entire 1,000-LED trench for a full system test. I’ll definitely post a video of that once it’s working.

Last night I mounted the last of 1,000 LEDs into the trench. It’s a project milestone for sure. I also donned the trench, which I’m happy to report is a one-person operation, and while it is definitely heavy, it is manageable and relatively comfortable. (I didn’t even have the lining in it, which will likely make it even more comfortable.)

In this photo, the front of the trench is not clasped because I haven’t done that work yet. I cut the buttons off so it only hangs open right now.

I absolutely suck at sewing, but yesterday I did some of that anyway. I had to reinforce one hole that weirdly coincided with one corner of the pocket, and sew a little bit of the pocket opening closed to protect that LED. I also sewed closed all the front button holes for strength. I was going to put anorak snaps into the front of the trench, but now I’m starting to think about using “hook and eye,” skirt hooks, or other hooks if I can find some that fasten positively rather than passively.

The next week is going to be all software work. I’ve invented a new mode of musical interaction for this year, and I’m going to start implementing that. Also I’m going to try to synthesize a “points file” for the trench that describes to my animation software the location and order of all the LEDs. Then I’ll be able to re-render all my Anthrolume 3.0 animations for the trench’s 1,000 LEDs.

anthrolume
Create a free website or blog at WordPress.com.